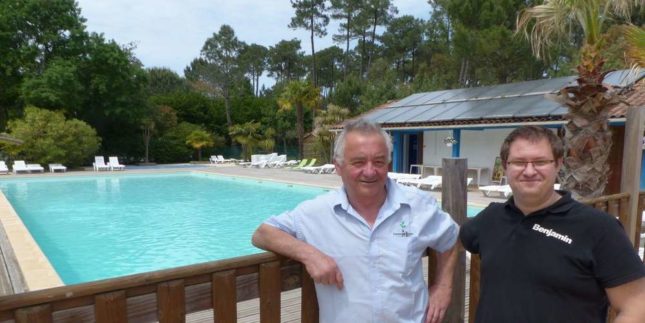 Engaged for several years in conservation work, Mr Dauga keeps up his struggle for environmental protection as much as possible, notably at Blue Océan campsite.
This was awarded a European ecolabel in 2009, the only official European ecological label which can be used in all the member countries of the EU.

This distinction brings with it real assurance of the reduction in the environmental impact of the establishment on the whole tourist infrastructure: linen, cleaning, catering, maintenance, the pool, green spaces, etc.

The campsite in Ondres has even been selected by the European commission, to represent the tourist establishments awarded the EU ecolabel, throughout the «High Level Conference on sustainable tourism », organized at La Valette, 8 May, on the ecolabel’s 25th anniversary.

The weight of three Airbus planes

The manager, Benjamin Souviraa, on his return from Malta, summed up his intervention with 3 figures: in 8 years, the reduction in waste production has meant a saving in the weight of three Airbus A320. Water-wise, savings made adding simple spouts on each tap represent the saving of the equivalent of 540 tankers. Finally, in terms of electricity, the use of renewable energy sources and substances which are less harmful to the environment (at least 50% of the energy must come from a renewable source) mean that a year’s electricity is free every 8 years.

« The issue is important to us, but it’s colossal in terms of the planet», Benjamin Souviraa adds.

Last January 1st, only 78 French campsites (six of which are from the Landes region) were given the European Ecolabel title. Tourists are increasingly senstive to this. Separating waste, saving water and electricity like at home and respecting rules signposted in natural spaces to maintain the ecobalance are the main keys the two Ondres natives share with their clients.

See the article on the SUD OUEST newspaper’s site.