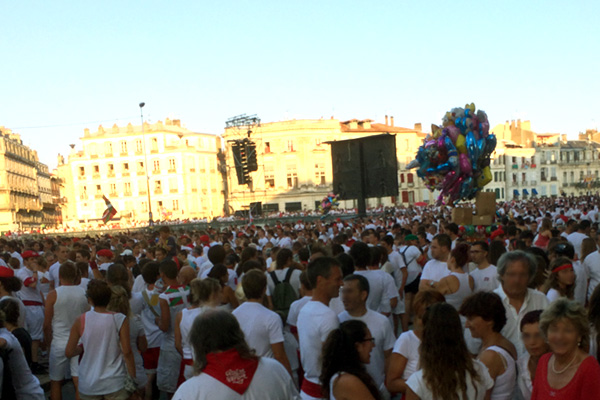 The Fêtes de Bayonne Festival from Wednesday, the 24th to Sunday, the 28th of July, 2019

Today, the Bayonne Festival brings together more than a million visitors, which makes it the largest festival in France and means it is one of the largest popular festivals in the world.
The Bayonne Festival is inspired by the success of the Pamplona Festival, a celebration dating back to the Middle Ages. In 1932, legend has it that it was one of the Aviron Bayonnais rugby players that had the idea of importing the festival from the other side of the border.

Thus it is that the festival has begun for 90 years after the throwing of the keys to the town to Bayone Town Hall. Visitors begin 5 days of celebrations which involve local commerce, concerts , local history as well as cow races, bullfighting & fireworks (like in the mascleta festivities in Valencia, Spain),…
Moreover, the celebrations are characterized by the wearing of red and white clothes, which are colours emblematic of the Basque country.

Places to visit at the Bayonne Festival

Almost all the restaurants and bars stay open during the festival and offer a selection of local dishes:
Axoa (veal stew), Basque chicken, piperade, sweet peppers stuffed with cod, and txakolipatxaran…

From Wednesday through Sunday, the Bayonne Festival has a programme for all tastes.
The opening of the festival takes place on Wednesday at 8pm with a concert and a ceremony before the town enacts the throwing of the keys at 10pm. This symbolizes the town, which gives its citizens the key for 5 days before taking command again.

Thursday is children’s day. From 9am, different activities get under way for the young, with an introduction to Basque pelota from 9am to 12pm, followed by musical attractions. The programme is for all ages.

For many years, the town of Bayonne has developped a public transport network to avoid the overcrowding of vehicles coming to the region.
In fact, no need to worry about where you leave your car, as the Basque Bondissant bus company offers you a return fare of about 10€, depending on your departure point.

From Ondres village, you pay 8€ for your return journey to Bayonne.
This ticket can be bought directly from the town tourism office, bus driver is on the Basque Bondissant site.
As the festival is in the daytime and night time, buses leave from 11am from Ondres town centre, with the last one leaving at 10.15pm.
The bus leaves you in Basque Square, which is just next to Bayonne Town Hall, where the festivities kick off with the emblematic throwing of the keys.

The bus returns frequently, with the first leaving at 6.45pm and the last at 4am for late-night revellers.

Bayonne Town is not only lively during the festivities but remains full of other activities.

The Sainte-Marie de Bayonne Cathedral, dating from 1213, is a place to visit which was named a World Heritage Site in the 90s.
It is located right in the middle of Bayonne’s town centre and is characterized by its Gothic style and its tower of 75 m, overlooking the River Nive and Adour.*

The Basque Museum is in old Bayonne and is considered the most important Basque collection in France. Open from Wednesday to Sunday, entrance is free for those under 26 years of age.

Visit Great Bayonne, where the oldest part of town is. With many little boutiques, it’s an ideal place to discover the local cuisine and the town’s small craft shops.

Little Bayonne is where the town’s nightlife can be found. A meeting point for the region’s youth, this part of town contains the bars and nightclubs.

A village on the Atlantic Coast between Hossegor & Biarritz, Ondres, a seaside resort, combines sand dunes with Landes woodland. This all-year-round village has a sporty side with its surf school and riding centre, while giving you the authenticity of a small Landes village with Basque influence.
Just 15 minutes from Bayonne, get away from the calm of the village to join the crowd and celebrate for 5 days.

The Blue Océan campsite at Ondres

On a four-acre pine forest, enjoy accommodation with superb terraces, a green area with a big swimming pool & barbecues.

Take advantage of the calm of the village to enjoy the beach, which is 900 metres away.
You will be able to learn or perfect your surfing, or wander on an enormous fine sandy beach.
Discover the surrounding villages like Hossegor and Capbreton by taking the cycle paths through the forest thanks to our cycling partner!
If you decide to sacrifice one of the 5 afternoons of the festivities to participate in the camping activities, our camp counsellors liven things up with pétanque tournaments, a rafting trip, or relax with our Yoga course and massages.

Located on the North Atlantic coast near Spain, Bayonne or Baiona is an emblematic destination both for the French and for foreigners. With a population of a little more than 45,000 people, some know the town for its renowned Bayonne Ham while others return to celebrate its annual festival, the Bayonne Festival.

Located not far from the Atlantic Pyrenees, bathing in the River Nive & Adour, this small town of the New Atlantic region borbers both the Basque country and the Landes.

A small fishing village that fast developped under the Roman empire, Bayonne is surrounded by ramparts, which were to prevent surrounding people from invading.

The remains of its Roman developments dating from the 4th century can be visited still today.
Stretching over more than 8 hectares, a military camp was built by the Roman Empire there surrounded by towers that rise over this small Landes town.

This location was key to the Roman Empire, which came to command the trans-Pyrenean routes.

In the Middle Ages, the region came under the control of the English Crown after the marriage of Aliénor D’Aquitaine and King Henry Plantagenet.
This period thus became known for the town’s considerable development thanks to its privileged position next to two rivers, the Nive and the Adour, as well as its proximity to the Atlantic Ocean.
Considered now a trading town, it trades with the Spanish towns nearby as well as Northern European countries. The town used to supply Landes resin, local wines, wool and dye, such as Albi pastel blue.
Bayonne’s prosperity and its maritime power rapidly began to create tensions with the neighbouring forces. Bayonne and la Rochelle thus started a maritime war.

In the 16th century, English domination came to a peak when Charles the 7th‘s troops occupied the town. This period was difficult for the town, which saw itself barred from exchanging with the English kingdom. Bayonne lost in naval power and found itself suffering from the competition of San Sebastian & Bilbao’s development in Spain.